All students and faculty members of the DTVE are asked to note that there will be a general assembly at the Division's campus in Arnos Vale tomorrow, Monday 30th January 2017, starting at 8:30 a.m.

DO NOT go to the Centre in Kingstown or Diamond. All students and faculty of the Division are required to report to the DTVE campus for 8:30 a.m. tomorrow morning.

UWI B.Sc. Social Sciences Level One Offered at the SVGCC

The St. Vincent and the Grenadines Community College (SVGCC) invites applications from persons interested in doing a B.Sc. in Social Sciences at UWI with majors in:

You can complete the first year (Level 1) of these programmes at the SVGCC. 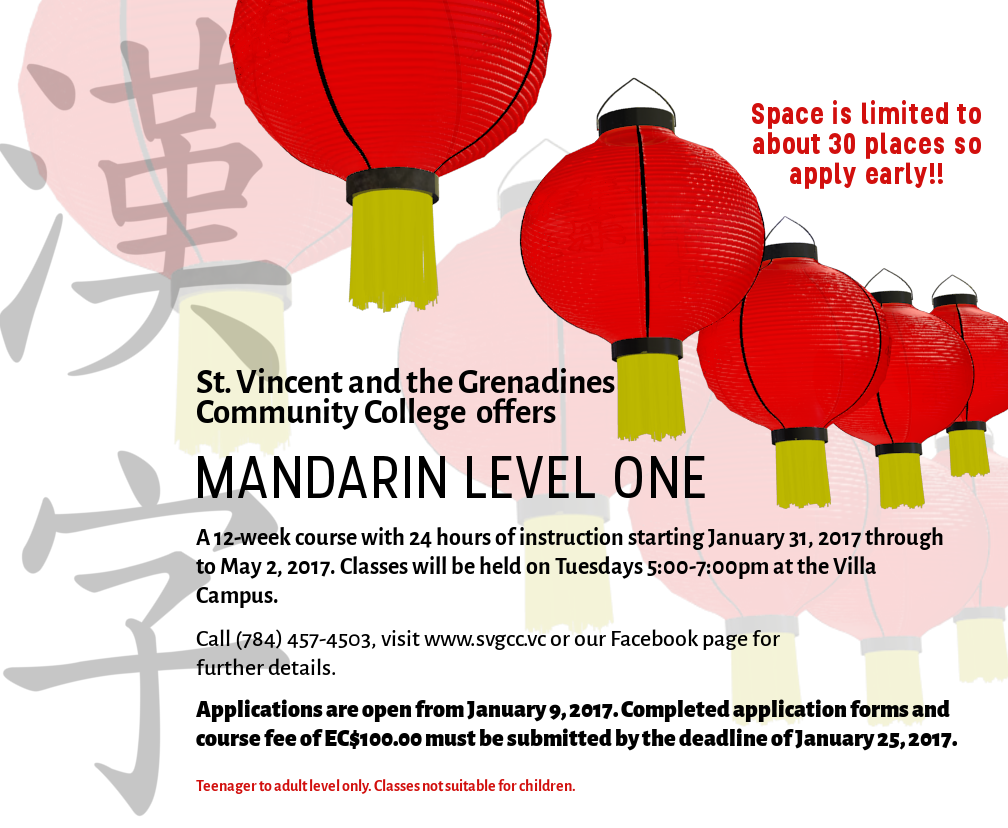 The SVGCC is pleased to once again be offering to the general public a 12-week Mandarin Level one course.

The application form is available via the link below. Interested persons are required to submit the completed Application form, any additional requested documents and a course fee of EC$100 no later that January 25th, 2017 at the front desk of the Administrative Office at the Villa Campus (Please note that the Administrative Office is currently temporarily relocated on the ground floor of the Teachers Building at the Villa Campus).

The SVG Community College Sports Department will begin its second semester activities on January 6th 2017 with the Colleges' Select Football Team travelling to Union Island and Carriacou for a six day tour.

The team is being coached by Wesley Charles with Roxell John as Manager and Koyana Horne as Assistant Manager and Match Official.

The tour party will depart for Union Island on Friday January 6th, where they will enjoy an evening of recreational activity on the Grenadine Island. They will then travel over to Carriacou on Saturday January 7th where they will play three football matches.

On Saturday January 7th the SVG Community College will come up against the Hill Top Ballers Football Club. They will then meet the Laureston Ballers on Sunday January 8th, and end with a match against the Uprising Youths on Tuesday January 10th.

The tour party will return to St. Vincent on Wednesday January 11th 2017.

This is the first of three overseas tours which the SVG Community College Sports Department is hoping to realize during the second semester.

Plans are on the way for a possible participation in the 2017 Penn Relays in April, as well as towards the Colleges' second appearance in the Sir Garfield Sobers International Schools Cricket tournament in Barbados in July.