Eligible graduates of the George Stephen Secondary School are invited to apply for the Theresa Warrican Scholarship Award.

The family of Mrs. Theresa Warrican, in honour of the high value she placed on education, is initiating the awarding of one scholarship to a former student of the George Stephen Secondary School, to pursue two years of full-time study at the St. Vincent and the Grenadines Community College.

All successful 2016 applicants into the SVGCC's Division of Arts, Sciences and General Studies and the Division of Technical and Vocational Education are reminded that orientation will take place on Thursday 1st and Friday 2nd September 2016 at your respective campuses.  The orientation timetables and groups are available via the links below.

CAPE orientation will take place on Thursday and the Associate Degree orientation on Friday.  Students have been placed in five groups for the orientation sessions.

All students are expected to be present on Thursday.  You will be guided by your timetable regarding Friday's orientation activities.  Students have been grouped by programme.

Persons who have received acceptance into the Division of Arts, Sciences and General Studies and the Division of Technical and Vocational Education are strongly advised to carefully read and follow the dress code stated in their acceptance packages when visiting the campus for:

Successful applicants are required to wear a plain white top and a blue or black pair of pants or skirt. The top may be a shirt, t-shirt or polo (the SVGCC polo is also accepted). Pants should not be too tight and skirts should not be shorter that 2 inches above the knee.

Failure to adhere to the dress code will result in the individual being asked to leave the campus and return when they are appropriately dressed.

Important Notice for Applicants Regarding Payment and Registration

The St. Vincent and the Grenadines Community College wishes to thank persons for their interest in furthering their studies at the institution.  Applicants are urged to click the link below to access important information regarding the issuing of responses to applicants, registration and payment of fees.

Applicant Notice Regarding Payment and Registration 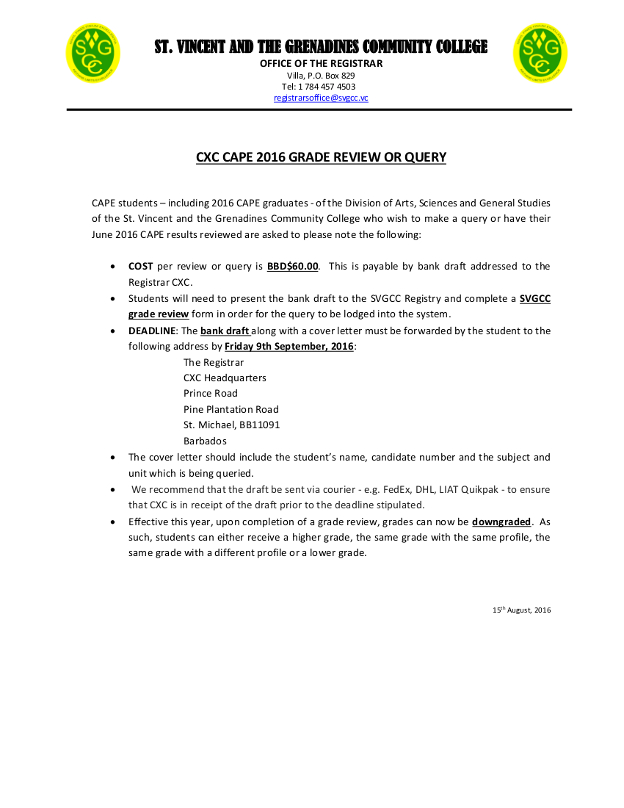